Contact us to experience the JJ's difference You won't be disappointed.

JJ's are a team of committed, efficient and motivated people who strive to achieve excellence in everything we do.

Our goal is to provide you with the best service available in the Southland, Otago and Canterbury regions.

Wayne was born, bred and educated in Western Southland, upon finishing school he moved to Invercargill and completed an apprenticeship in the automotive industry.
Wayne joined JJ Limited's Invercargill team in 1996 and after six years as a service technician, he took over as Service Manager, a position that he still holds today.

I was born and bred in the Horowhenua District, upon leaving school I completed an apprenticeship and worked in the automotive industry for 15 years.
I moved to Southland in 2005 and joined the team at JJ Limited Gore in 2008 and took on the roll of Service Manager in 2013.

Sab grew up on a farm in the UK and became an apprentice mechanic at Peacock and Binnington working on Massey Ferguson, Fendt, and Challenger tractors.
As a fully qualify field service technician Sab continued with Peacock and Binnington for another four years until 2013 when he decided to spread his wings and see what New Zealand had to offer.
After doing two seasons with us as a field service technician he decided to stay on permanently and took on the role as Service Manager Mosgiel.

Brian King comes to us with 40 year’s experience in the heavy motor industry as well as 25 years as a truck mechanic and 15 years in the agriculture industry as a workshop manager. 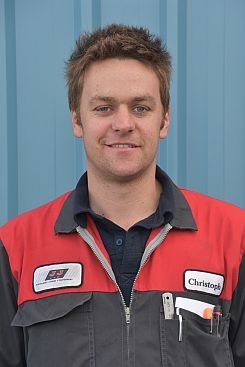 Christoph is a qualified A grade mechanic and has been with JJ’s Ashburton since 2009.  Christoph’s extensive knowledge of AGCO products is a real asset for both JJ’s and the customers we serve.

When it comes to PARTS and SERVICE always insist on genuine parts and JJ’s legendary service.